The pandemic sounded a cacophonous wake-up call for the global population and despite the despair it caused, it also set into perspective what a real worldwide crisis looks like and how it affects the economy, businesses and overall lives of the people inhabiting the planet. Now, in the light of this crisis, people are taking impending crises possibilities more seriously.

However, in spite of the devastation it has caused, an article by World Economic Forum (WEF) stated that Novel Coronavirus is not the greatest risk facing the world right now. WEF highlighted that according to the report titled “Scientists’ Warning on Affluence” published by a team of scientists from UK, Switzerland and Australia, currently, affluence is greatest threat to our world.

In the context of the impending climate change crisis, the environmental research report warned that only upping the efficient use of resources will not be enough to bring substantial changes, rather true sustainability can only be achieved by bringing significant lifestyle changes.

Overconsumption has been underlined by many international leaders as a major contributor to existential environmental problems, such as pollution, loss of biodiversity and climate change. Professor Tommy Wiedmann, the lead author of the report, opined that technology alone can’t solve these problems and to drive real transformation, people must change their affluent lifestyles and curtail overconsumption, and complement it with structural alterations.

The recent developments have compelled the international community to accept that currently our planet has reached an ecological tipping point. In the aftermath of the pandemic as the world is rebuilt, it must have nature at the core of all important decisions.

About 50% of the global GDP is bound by the natural world, states UN. Moreover, millions of livelihoods are dependent on nature and billions of people are closely connected to nature and fully reliant on nature for remedies and medicines.

In WEF’s Global Risk Report 2020 highlights that the primary problem that the advancements achieved by resources efficiency and tech-enabled environmental protection solutions are both outrun by the rise of consumption. The report also points out that human-made ecological harms is one of the greatest and most impactful threats that the world is facing currently.

The present situation warrants a restructuring of the traditional framework of supply and demand in capitalist societies where consumer need propels the economy. A study shows there is a correlation between flourishing economy and deteriorating environment. It shows that from 1970 to 2020, with the rise of global production and global GDP, global emissions have also increased in tandem. Thus, some economists perceive growth itself as a key challenge of the 21st century global capitalism. 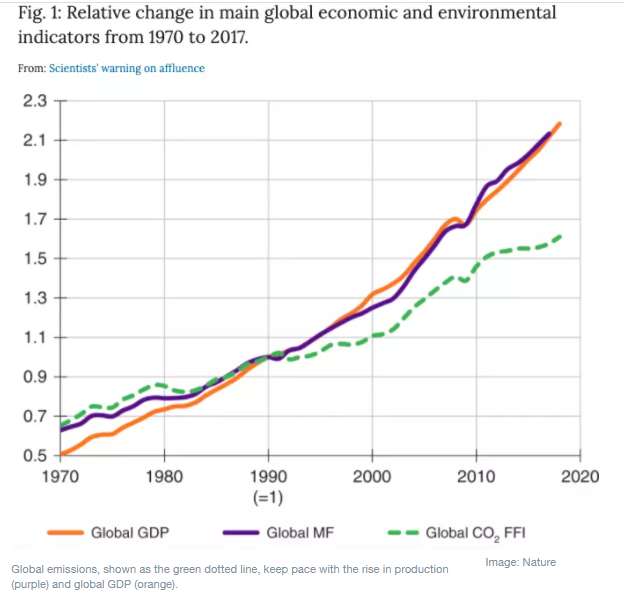 Professor Klaus Schwab, founder and chairman of the World Economic Forum, called for a “great reset of capitalism” in the light of the pandemic. In his view, the world needs a stakeholder economy, where solitary profit of the enterprise is replaced by fairer outcomes for all, driven by changes in tax structures, fiscal and regulatory policies, and completely new trade arrangements.

In addition, Schwab urges for investments that enable shared goals like equality and sustainability. In many parts of the world such actions are already taking place with the aid of economic stimulus programs. He also encourages more public-private collaboration for the benefit of all.

While such statements have been made earlier, conditions of the world had never been so dire, and the people widely accept that. The reset is real, and the national and private leaders are indeed working towards a more inclusive, equitable and sustainable world. If these efforts continue over the years and the global population stays true to these objectives, we will definitely see some positive changes.