By any metric imaginable, Warren Buffett is one of the most sought-after people on the planet. The Oracle of Omaha’s personal frugality despite his boundless wealth is part of his aura and appeal, drawing people into his orbit with unfailing ease.

As you might imagine, students still unsullied by the vagaries of life often visit him to get life and investing advice that could stand them in good stead. And more often than not, Buffett lures his unsuspecting audience into a little game he often likes to spring on them. Each student is asked to select a classmate, but there is a twist, as there always is. Picking a classmate when there’s no stakes at play is easy; but which classmate would you choose if you could have 10% of their earnings for the rest of their life.

Is it the one with the sky-high IQ? Is it the jock who excels at athletics? What are the qualities you look for when picking out someone in this situation anyways? There’s no playbook to guide you on this one.

Just when the audience is most flummoxed, Buffett will up the tempo and change things up again; who, he asks, is least likely to succeed in your opinion, and why? Of course, this is not a public trial of character. The students are asked to list their reasoning out on a sheet of paper, with positive attributes on the left and the negative ones on the right.

For Buffett, the answer is simple; you have to choose to espouse and embrace qualities from the left, and stop doing the ones listed on the right.

“You’re looking for three things, generally, in a person,” says Buffett. “Intelligence, energy, and integrity. And if they don’t have the last one, don’t even bother with the first two. I tell them, ‘Everyone here has the intelligence and energy—you wouldn’t be here otherwise. But the integrity is up to you. You weren’t born with it, you can’t learn it in school.”

“You decide to be dishonest, stingy, uncharitable, egotistical, all the things people don’t like in other people,” argues Warren. “They are all choices. Some people think there’s a limited little pot of admiration to go around, and anything the other guy takes out of the pot, there’s less left for you. But it’s just the opposite.”

And so, there it is. The 3 qualities Buffett feels everyone needs to have in order to succeed. It really can be that simple. 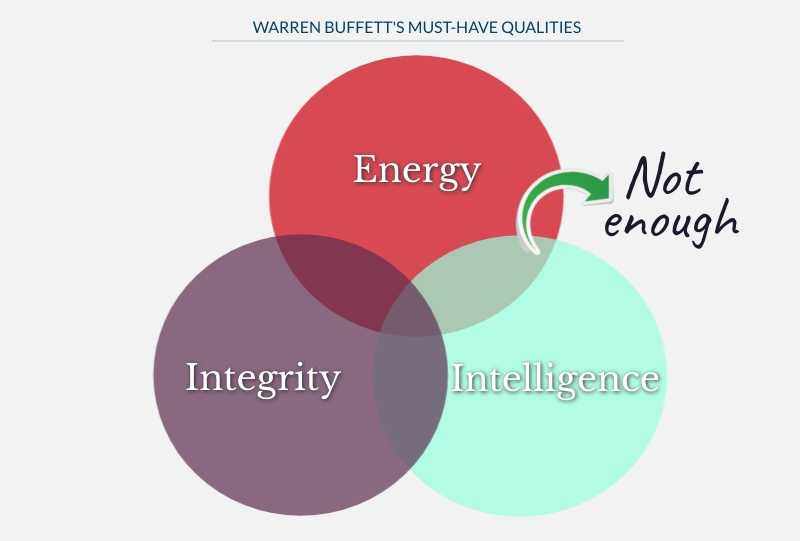 5 management lessons from the Mumbai Indians

6 tips to be a kick-ass communicator