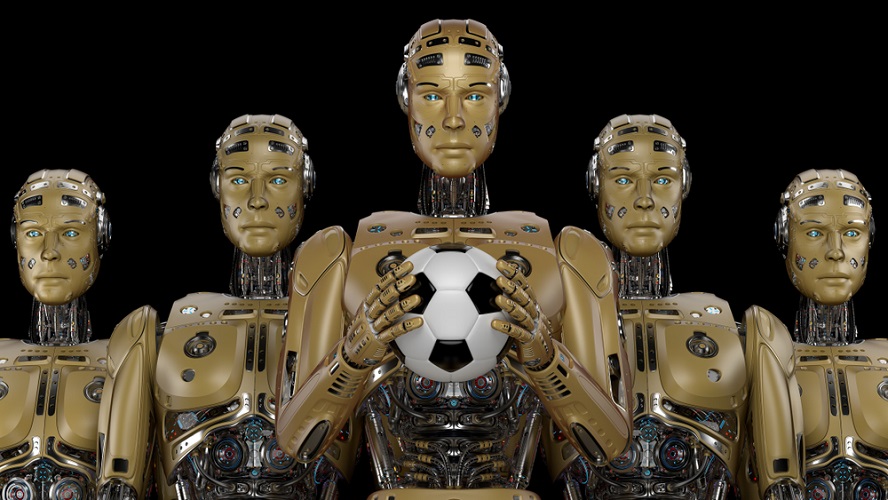 In 1997, a computer programme named Deep Blue beat the world’s reigning chess grandmaster, Garry Kasparov, in a highly publicised, multi-day chess match. Enthusiasts have debated the fairness of the game, but the computer’s victory was a major milestone for machine learning.

Today, researchers have been using another game to advance artificial intelligence (AI) and automation: football.

The agility, strategy and teamwork required in football makes the beautiful game a challenging and fruitful feat for AI and autonomous technologies. The International RoboCup Federation, which organises robotic football tournaments around the world, has long been leading such efforts.

“RoboCup is a very special, uniquely inspiring event,” said Peter Stone, the former RoboCup president and the executive director of Sony AI America, an AI development and research company. “It merges long-term, ambitious thinking about how AI and robotics will change the world with practical, immediate considerations regarding how to design, build and program prototype, custom-built robots to sense, decide and act.”

Under RoboCup rules, each team must consist of fully autonomous robot footballers; once the match begins, the human coaches are not allowed to interact with their robot players. Stone, who is also a professor of computer science at the University of Texas at Austin in the United States and the director of the university’s Learning Agents Research Group, noted that achievements in robotic football have advanced a range of AI and machine learning fields. This includes human-robot interaction, computer vision and multiagent systems, among others.

Such advancements are shared in the RoboCup Symposium, a publishing arm of the organisation that has so far produced hundreds of scientific papers detailing machine learning breakthroughs that emerge from the competitions.

Football was also used recently to advance AI by researchers who successfully created digital footballers that learned the game as they faced off against each other in a computer simulation. The project—published in August in Science Robotics, a peer-reviewed scientific journal—used human motion data and other machine learning systems to enable the players to perform and improve football skills.

Experts note that advances in robotic football have significant implications for other forms of AI and automation such as self-driving cars and care robots.

“In many countries, we have populations with insufficient young people to care for their elders. Robots will be the way in which that care can be provided to keep people active and in their own homes longer. Autonomous vehicles will provide mobility to the older generations,” said Kay Firth-Butterfield, the World Economic Forum’s head of AI and machine learning. “These important real world applications can start with creating robot footballers where tests of agility, machine vision and machine learning are vital to playing the game.”

RoboCup, for instance, has expanded its efforts to include new competitive leagues that feature autonomous service robots. This includes the RoboCup@Home league, which focuses on the development of robotic personal and domestic service capabilities. The organisation also hosts the RoboCup Rescue league where teams compete to develop advanced robotic tools for emergency responders. The most recent winner in this tournament was a research team from Kyoto University in Japan whose search and rescue robot demonstrated novel dexterity.

The complexities inherent to football continue to make the RoboCup football tournament a leading source of inspiration and challenge for robotics and AI researchers.

“Will soccer go the way of chess, checker, poker, Jeopardy, Starcraft, Gran Turismo, and other heretofore human endeavours that have been conquered by AI? Or will the requirements for real-world perception and human-like speed and agility keep it out of reach?” Stone asked. “This question remains a source of debate and uncertainty within the community.”

Nonetheless, RoboCup organisers maintain an ambitious goal: by the middle of the 21st century, a team of fully autonomous robot footballers will face off against the most recent winner of the World Cup and win.

What is the ‘twin transition’ – and why is it key to sustainable growth?