The world’s population started yearning for a miraculous vaccine since the Novel Coronavirus made its appearance in early 2020. But unlike wizards’ magical potions that are capable of curing entire villages, real life vaccines can’t be made overnight.

However, that didn’t hold back the scientists and pharmaceutical companies of the world. More than a handful of companies succeeded in inventing and completing clinical trials of the potential Covid-19 vaccines. But that is just the first step towards a world that is capable of fighting off the Covid-19 menace. The second step is manufacturing the vaccines in huge volume and transporting that to the different parts of the world.

According to Airfinity, a data analytics company, US has the production capability to manufacture roughly 4.7 billion doses of the vaccine, till the end of this year.  That makes US, the largest vaccine producing country of the world.

India, a global frontrunner in the global pharmaceutical manufacturing space, is poised to be the second largest producer with the vaccine production capacity of possibly 3.1 billion doses, as per the findings of a study by Deutsche Welle. China, with the capacity of producing 1.90 billion doses is third on the list followed by UK (0.95 doses), Germany (0.50 doses) and South Korea (0.35 doses). 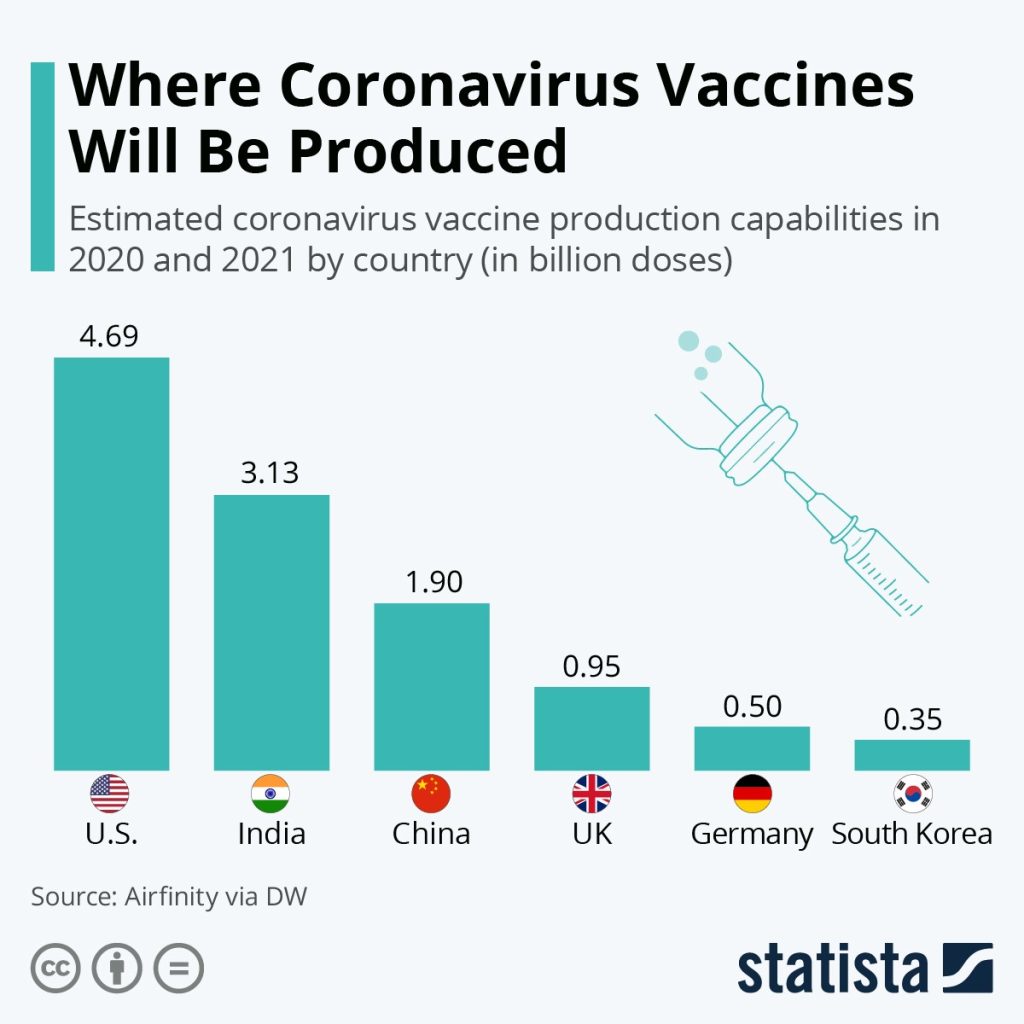 India has a major advantage over other countries in this matter, as it is home to the world’s largest vaccine manufacturer of the world – the Serum Institute of India (SII). As per the reports of Deutsche Welle, AstraZeneca has plans to manufacture 1 billion doses of “University of Oxford” vaccine at SII facilities in India. This vaccine is being called by the name “Covidshield” in India and the Indian government has acquired large number of doses of this vaccine at just INR200.

India also has access to a second vaccine – “Covaxine”, that has been made domestically and has been approved by the government, despite it not completing the stage three clinical trials and the obscurity around its efficacy since the efficacy number has not been published yet.

SII is in a unique position of advantage in the vaccine manufacturing sphere, since its deal with AstraZeneca allows it to produce one of the cheapest vaccines that is most easy to store, hence transport. Thus, the demand for the SII made vaccine is expected to be more, especially from the developing countries.

According to the latest available figures, which dates back to 2015, SII is the producer of about 1.4 billion vaccine doses annually. The same report (by the Access to Medicine Foundation) states that Sanofi had produced 1 billion vaccine doses, while GlaxoSmithKline manufactured about 700 million doses, in the same year. A major Covid-19 vaccine producer, Pfizer’s production numbers for the same year were not revealed.

Although SII was the largest manufacturer of vaccines, the company earned revenues amounting to just $566 million (approximately), as opposed to Sanofi and Pfizer, that earned between 35 – 50 billion respectively. That is because, SII is focused on making lower cost vaccines that are accessible to economically backward people, and hence for the Covid-19 vaccine, Bill and Melinda Gates Foundation has struck a deal with it to supply the vaccine to the less prosperous countries of the world.

“The Pharmaceutical Industry has potential to accelerate India’s growth agenda”