If necessity is the mother of invention, then innovation is the womb that enables its birth. In the aftermath of the Covid-19 pandemic when needs and norms are shifting rapidly, every country that wants to gain ground in the global economy is powering up its R&D division to maximize innovation.

However, Subramanian also emphasized that it is extremely essential for India to become the third largest global economy, and to make that possible the country needs to increase its focus on innovation, for which its Research & Development (R&D) investments must be “increased significantly”.

The report outlined the current status of Indian R&D where the numbers clearly show that 56% of India’s gross R&D expenditure is funded by the government, which is triple the average government contribution of the world’s top 10 economies.

The Indian business sector’s contribution, on the other hand, amounts to about 37% of the country’s gross R&D expenditure in comparison to businesses in each of the top 10 economies of the world. The below chart clearly highlights the significant difference between the government and business contribution towards R&D. 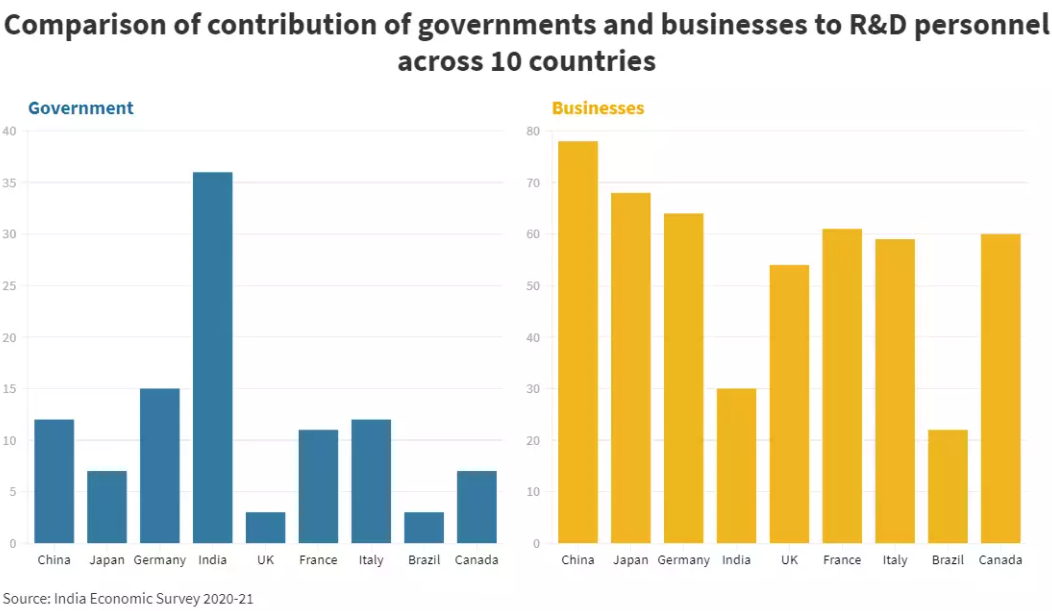 Along with doing the “heavy lifting” with regards to the nation’s R&D, the government of India also provides tax incentives to corporates which contribute to R&D. Despite this, the government has failed to encourage notable participation of the business sector in R&D till now.

While reporting on this Economic Survey, journalist L Divya suggested that the businesses’ dearth of interest in R&D stems from them being very output driven. Since R&D involves an extensive trial and error method, where a conducive result is not always guaranteed, most businesses find excuses to limit their investments in R&D.

While this approach did not necessarily throttle the growth of enterprises in a pre-Covid world, the same cannot be guaranteed in the “new normal”, where innovation has become synonymous with business success and growth. Today, all businesses, no matter which segment they belong to, must increase their investment in R&D and create a favorable environment for innovation, in order to flourish.

The same is resonated in the Economic Survey which clearly calls for the Indian business sector to “rise to the occasion” and radically increase its R&D expenditure to a level that matches India’s status of being the fifth largest economy in terms of GDP.

Contrary to some experts’ anticipation, the Budget 2021 didn’t enhance tax incentive for business investment in R&D, although, significant announcements related to R&D and innovation were made in the budget. Noteworthy among the announcements is the budget allocation of INR 50,000 crores to the National Research Foundation in a span of next 5 years, reports Invest India.

This substantial funding will boost India’s overall research eco-system and strengthen the focus on thrust areas, identified as national priority. The move clearly demonstrates Indian government’s commitment to enhancing the country’s R&D scenario, and now it is time for the business sector to follow suit and match the efforts made by its overseas counterparts.

Considering that most businesses are still in the reboot mode, such efforts would be easier to conceive and implement. Moreover, it will be of great benefit not only for the country but also the companies themselves.

Pay equity can bridge the gender gap in workplace

Battery technology: The key to a successful energy transition

Technologies driving supply chains in 2021 and beyond