11th Nov 2021: The 9th edition of conference of parties (COP 9) of the WHO’s Framework Convention on Tobacco Control is currently being held virtually this week.  During the event, Teodoro Locsin Jr. the Foreign Affairs Secretary, Philippines has called on the WHO “to regain the momentum” of tobacco control and consider “evolving and latest scientific information” in solving the global smoking problem. Philippines – Statement WHO FCTC Global Progress Report 2021 – YouTube 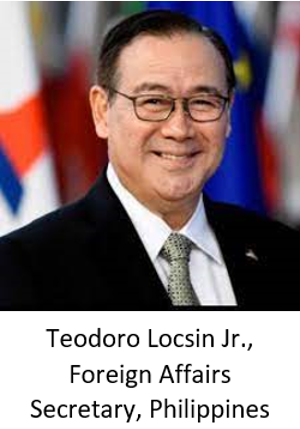 The Philippines Minister has said tobacco is a source of bad health but acknowledged that it “is also a source of good through taxation.” “Tobacco tax laws fund our poverty reduction, Universal Health Care, and COVID-19 recovery programs. They underscore the importance of tobacco use and funding of the state’s most important activities,” he said.

Locsin stressed that the Philippines’ position is for regulation and taxation, noting that a total ban is not under consideration due to the unwanted consequences that it poses.

Locsin noted that the tobacco industry is making progress in moving away from harmful products by introducing “products with similar satisfaction but with far less harm.” To cover the “far less harmful novel tobacco products,” Philippines has passed two more excise tax laws which ban the sales of e-cigs to minors and flavorings on vapor products.

“These laws recognize the fundamental difference between various tobacco and nicotine products – and acknowledge the benefits of continuing taxation on revenue rich activity,” Locsin said.

The FCTC is a global accord under the auspices of the World Health Organization (WHO) governed by (COP) which meets bi-annually to discuss the progress of the treaty’s implementation and policy recommendations around tobacco for its member states.

In a quest towards progressive regulations around tobacco harm reduction, Philippines’ recent remarks and positive policies is a reminder for regulators across the world to develop policies based on relevant and updated scientific evidence as opposed to moralistic policies.

Every year, healthcare expenditure and loss of productivity amount to a massive loss, especially impacting emerging economies. Smoke-free nicotine products offer a promising route to reduce the harms arising from smoking and is backed by compelling evidence. Yet, policy decisions deny adult smokers the option to switch to better alternatives – either through outright bans, outdated regulation or philosophical opposition.

India is home to 12% of world’s smokers making it the second largest tobacco consuming population in the world. Despite these spiraling numbers, the country has made limited progress to promote measures to control tobacco based on relevant scientific, technical, and economic considerations. As one of the largest emerging economies, India could have  led by example by adopting scientifically approved safer alternatives, yet the country banned THR products. This approach misses a huge opportunity to address the problem of cigarette smoking, considered by many to be the leading preventable cause of death and disease in India.

Extreme policies like bans go against the growing body of science that points to these products being significantly less harmful than cigarette smoking. Many experts and health authorities around the world, such as the UK’s Royal College of Physicians and Public Health England, have recognized that smoke-free alternatives to cigarettes represent a revolutionary opportunity to reduce the harm caused by cigarette smoking. As per a report undertaken by Public Health England ‘E-cigarettes: An evidence update’, E-cigarettes are 95% less harmful than normal cigarettes.

Realizing these vast benefits, many countries including UK, US, Japan and even emerging economies like Thailand and Uruguay are exploring progressive regulations to legalise e-cigarettes to help adult smokers quit real cigarettes.

WHO Framework Convention on Tobacco Control mandates countries to promote measures of tobacco control based on scientific evidence and economic considerations. Yet, many countries continue to look at the worst form of regulation by banning safer alternatives to tobacco. According to Locsin, the updating reports at COP 10 “must be done with transparency and in full consultation with all stakeholders so that our national experiences are all taken into account and due importance accorded each.

While Governments have historically looked at education, regulation and taxation to control the growing number of tobacco smokers, there is an urgent need to revisit its stance and provide smokers safer alternatives to smoking.